Superb cinematography, action sequences, and score make this film one of the greatest in the last ten years, August 29th, 2018 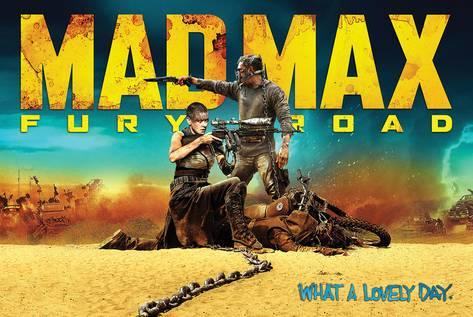 I've probably watched this movie about four or five times since it's came out! It's absolutely wonderful, and I never get tired of it

Right off the bat, we're introduced to our timeless main character, Max. After living out years in the wasteland, he's lost almost all traces of his humanity. However, throughout the film we see him rediscover his helpful nature, and his desire to save people from the world, and themselves

An often touted and rightfully admired aspect of this epic is the cinematography. George Miller took a production that was stuck in development hell for over a decade, recast and reshot the entire project, and created scenes that are hauntingly beautiful. From the blinding sun reflecting off the Austrailian dunes, to the gloomy swamps and wide-spanning salt flats seen later on, expert design is consistently showcased. Through limited dialogue, a cruel and intriguing world is crafted. The roughened Max and Furiosa truly look like they're hardened by years of survival, and the juxtaposition of the pristine wives of Immortan Joe display the range of beauty.

Arguably the most exciting and re-watchable aspects are the heart-pounding action scenes. Max and the rest of the cast are savage fighters, and obliterate anyone who stands in their way, but are still human. They aren't invincible, and need support from their allies, and this creates a sense of tension over how they're going to overcome the challenges ahead of them, or if they even will be able to. The action is spaced out with slower scenes and dialogue that build up the characters, their conflicts, and the world around them in very intelligent ways. Certain scenes are played out in fast-motion, giving them a ragged, desperate feel in a method I haven't seen done in any films before this one.

Furthermore, I believe that the soundtrack can make or break a movie. The rocking tunes and jamming drums really do give an edge to all the scenes. A humorous warboy even rides on top of a rig while playing an electric guitar, and the increase in volume and intensity as this character and the rest of the enemies draw closer to Max keep the viewer on the edge of their seats. The music is nothing short of spectacular, and alone are listenable and enough to bump any flick a couple points on my scale.

An absolutely astounding movie, and at the very least a decent action story to watch with some snacks on your couch with nothing else to do on a given afternoon/night!